NOT QUITE A REVIEW: CRACKDOWN 2

NOT QUITE A REVIEW: CRACKDOWN 2

After about four hours of Crackdown 2 I can safely say that I like it, mainly because I loved the original title and this expansion pack-cum-sequel is essentially more of the same.  A few tweaks and additions were made, most notably four-player online co-op, however even as a fan of the franchise I can admit that Crackdown 2 isn’t nearly as impressive as it’s predecessor and it falls flat in a lot of ways.

Crackdown 2 is set ten years after the events of the first game in which agents rid the city of three large gangs . For some unexplained reason, Pacific City has again gone to hell, a virus is turning citizens into zombie-like “freaks” and a single gang organisation called The Cell is terrorizing the city.

There is an overarching narrative in Crackdown 2 that sees The Agency tasked with restoring power beacons, liberating tactical locations from The Cell and wiping out the hideouts of the freaks. While on paper it sounds like there’s more variety than Crackdown, the mission structure really boils down to the same thing as before; move to an area and annihilate anything that stands in your way.

This time however, there are no boss-type characters to deal with and so far I have only been facing generic enemies. The  feeling of satisfaction for completing objectives is far less than the first game, making Crackdown 2 feel much more empty or soulless in a way. It lacks any real personality.

The day/night cycle has become more relevant in Crackdown 2. By day, Cell members roam the streets, leaving tactical location held by them more vulnerable and at night thousands freaks come out -awkwardly rising from the pavement- leaving their nests ripe for destruction. There are often a ton of freaks on screen at night, though they basically stick to being at ground level and can easily be avoided by your acrobatic agent.

A caveat is that while conventional weapons are great for dealing with Cell, they are relatively ineffective against freaks. Contrarily, a new UV weapon system can take out a mass of freaks easily but will do little against Cell. It’s an attempt at balance that is rendered ineffectual by your agent’s ability to punch and kick. 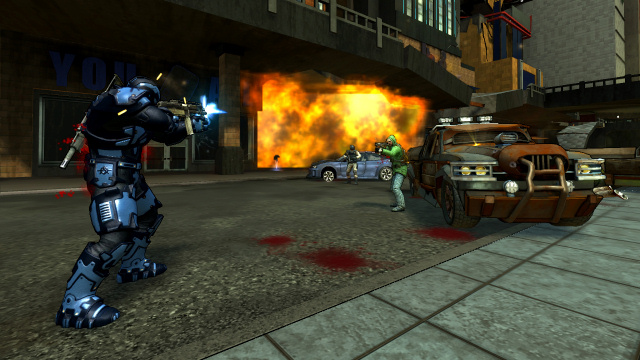 While melee attacks are still quite awkward, the team at Ruffian actually managed to make the weapon targeting system worse than the first game, which was already pretty squirrely. Target priority is completely screwed up (even after a title update) and will often snap to objects in the background, foreground and in some cases, useless objects like the door of a civilian car. It’s extremely annoying, especially during a heavy firefight.

Platforming around and collecting hidden orbs and agility orbs can still be quite fun and for most Crackdown fans this is probably the main draw of the franchise. However, you will be collecting orbs in the same city and though some of its layout has changed, I have literally picked up orbs in Crackdown 2 that were in nearly identical spots as before. On the plus side, rogue agility and driving orbs have been added that require you to chase them through the streets or along rooftops.

Getting around feels a lot more clunky than before to me. Your agent needs to be perfectly lined up to grab a surface and often will not grab onto things that appear to be climbable. In one case I traversed a silo using the metal rings that hold it together, then literally two minutes later and a few blocks away an identical structure could not be scaled. Admittedly this was a problem in Crackdown, but it feels worse and more inconsistent here some three years later.

Though the draw distance has received a significant update and Pacific City is no longer blanketed by fog, there are a few things about Crackdown 2 that make it look less appealing than the original, which again, is three years old.

First and foremost, the city itself feels sparse. Buildings lack a level of subtle detail, such as having junction boxes or air conditioners on them. In the first game these objects could often be used to create tricky platforming sections, whereas now everything feels quite literally straightforward and flat.

Textures, both on buildings and terrain are also noticeably worse and texture seams can be spotted everywhere. Explosions have been toned down and have lost the “oomph” they once had. The colour palette looks more washed out than before and though trivial, Crackdown 2 is missing the cool scanning effect when you target a vehicle to tell you if it’s friend or foe.

The game also has much more prevalent screen tearing and frame rate issues than the original Crackdown. This isn’t necessarily the fault of Ruffian, who had a very short development time to deal with and were unable to reuse the Renderware engine because its creator Critireon Games was purchased and internalized by EA, but the problems are very noticeable.
It’s not all bad news though and there are some good things about Crackdown 2 that will keep me playing. Rooftop and vehicle races are back, the aforementioned rogue orbs are fun to chase down and you can now pilot helicopters. Also, when you have maxed out your agility (I’m more than halfway after four hours), you can glide around the city in the wing suit and I’ve seen a rather cool-looking tether weapon in videos that I can’t wait to play around with.

Another nice addition is that of a radar that briefly shows you any orbs in your vicinity at the touch of a d-pad. This will make hunting down the last of the 800+ orbs much easier than before, though it feels a bit cheap towards the beginning of the game.

I’m playing solo for now, but will be diving into some four player co-op action as soon as I can. My Xbox LIVE friends list has over 50 active users on it and only two of them have even played Crackdown 2 so far one full day after the official launch date, so it may be tough to get a session together. The addition of orbs that can only be collected during co-op play is annoying.

Like other reviews have said, it really is more of the same. A bit more is some cases and a lot less in others. Crackdown 2 is fun for me because I loved Crackdown and I can look past a list of flaws that took me around1000 words to describe.

I am hooked on collecting orbs, I love blasting and power sliding my way through freaks and I will play until my agent is maxed out. Am I happy I paid $70 CAD ($60 USD) for Crackdown 2 after waiting three years for what can best be described as a half-baked expansion pack? No, absolutely not.