Designed as a more traditional input method that the Wii U GamePad or the Wii Remote, the Wii U Pro Controller from Nintendo is both comfortable and responsive, but also lacks some of the functionality that its intended audience tends to look for.

The Wii U Pro Controller weighs in at about eight ounces (227 grams), measures about 6.25 inches (15.9 cm) across at its widest point, about 4.75 inches (12 cm) tall and about 1.5 inches (3.8 cm) thick including the analog sticks. For a frame of reference, it is slightly thinner than the Xbox 360 Controller, particularly in the grips, though it carries the same basic size and shape.

The face of the Wii U Pro Controller contains four digital action buttons (A,B,X,Y), four function buttons (start, select, power and home), a d-pad larger than the one found on the Wii Remote and two symmetrical analog sticks that for the first time on a Nintendo console include clickable buttons and are not limited by octagonal gating.

On the top of the controller, you will find two bumper buttons (R, L) and two triggers (ZR, ZL). Unfortunately, these triggers are digital rather than analog. Though this omission admittedly won’t affect everyone, those with a penchant for racing games (such as myself) will likely miss the precision in acceleration and braking that analog triggers provide.

The Wii U Pro Controller also has a rumble feature and houses a battery that charges via a standard USB cable and can reportedly last up to 80 hours on a single charge. Another notable omission however is the lack of a headphone jack, meaning that if you want to chat with your buddies while you play, you will need your Wii U GamePad nearby with your headset connected to it. I should also note that the controller lacks any sort of motion functionality, though I doubt many people will actively miss it.

The most important thing in a controller is comfort and ease of use and the Wii U Pro Controller succeeds at both. Though the right analog stick and button placement take some time to get used to I had no issues beyond that, even during long play sessions, which can be hellish for someone with arthritic hands.

One of the best things about the Wii U Pro Controller is that it helps break down some of the barriers to accessibility inherent in both the Wii U and its predecessor’s standard control schemes, specifically for one-handed players.

Though this is a bit of a generalization on my part, one-handed players that are able to use a DualShock 3 or Xbox 360 Controller should be able to adapt to a Wii U Pro Controller with relative ease.

Unfortunately one of the biggest downfalls is that the controller is not supported as standard across all software and is so far relegated to use with a select group of mostly multiplatform retail games, Monster Hunter 3 Ultimate and a few titles from the eShop.

For me, the biggest flaw of the Wii U Pro Controller is that it cannot be operated independently without having the Wii U GamePad powered on and connected to the console. Though some games, namely Call of Duty: Black Ops II can take advantage of using both controllers at once during single player gameplay, most do not and simply cause needless battery drain to your Wii U GamePad, even with the display turned off. 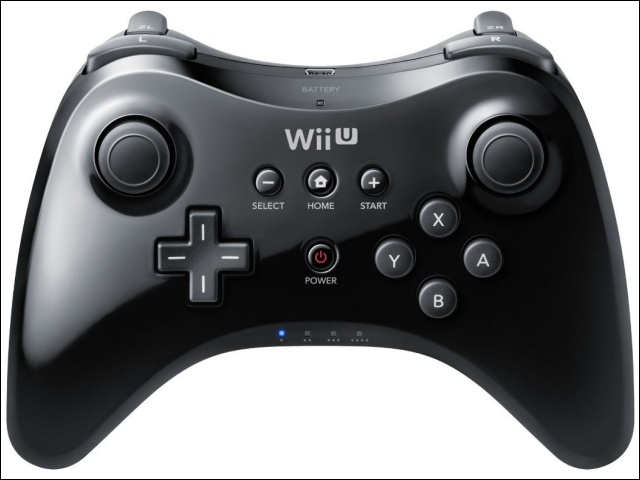 As far as my own gameplay experience with the Wii U Pro Controller, I’ve tested it with Nano Assault Neo, Need for Speed Most Wanted U, Call of Duty: Black Ops II and The Cave.

Save for Nano Assault Neo, these are all multiplatform games that were originally designed around traditional controls and I had no issue playing any of them. The only game I found to have a real advantage with while using the Wii U Pro Controller was Need for Speed Most Wanted U, which had as much to do with the low screen resolution of the Wii U GamePad as its bulk.

It is quite unfortunate that Nintendo has chosen not to implement Wii U Pro Controller support in first party games like New! Super Mario Bros. U and LEGO City Undercover. While these games do take advantage of the Wii U GamePad, they don’t do so in any way that could not be emulated with a traditional controller.

For example, when using the scanning function in LEGO City Undercover, the action on your TV is essentially non-existent and could easily be switched to what is displayed on the Wii U GamePad with functions executed by the buttons and sticks on your controller.

Though a lack of software support hinders the overall usefulness of the Wii U Pro Controller and online gamers may be annoyed by its lack of a headphone jack, from a technical and comfort standpoint it is a very capable piece of hardware.

If the Wii U is your only console and you are interested in some of the games I’ve mentioned I would highly recommend this controller, but if you already have an Xbox 360 or PlayStation 3, chances are you can find 95% of the games it supports elsewhere at a lower cost.

– Limited Software Support
– No Motion Capabilities
– No Analog Triggers or Headphone Jack
– Cannot Operate Without Wii U GamePad On
Recent Posts
Categories
Login to Game Forward
Reset Password
Enter the username or e-mail you used in your profile. A password reset link will be sent to you by email.