Developer MythPeople brings a retail quality puzzle game to the iPhone/iPod Touch platform with Azkend. It has many of the elements found in the popular and addictive games at websites like RealArcade or PopCap Games; attractive graphics, a lengthy Adventure Mode and of course, excellent gameplay that has the power to keep you up late at night.

Azkend tells the story of a traveler trying to return an ancient Relic to a temple in the far east in order to lift a curse. Along the way he will encounter more than 60 unique levels of match three style puzzles as well as some hidden object gameplay. Thanks to a great power up system, a thoroughly realized art style and a core mechanic that feels like it was made for the iPhone/iPod Touch, Azkend has fast become one of the best puzzle games available on the platform. 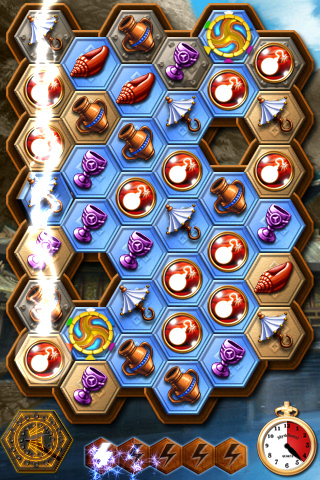 Since Bejeweled arrived a few years ago, match three style puzzle games have become extremely popular amongst casual players. Fans of those games will find a lot to like about Azkend. The game feels instantly familiar, but brings quite a few unique traits to the table.

Azkend is played on boards made up of hexagonal tiles. Players simply touch a tile and drag their finger to slide over adjacent matching tiles to make groups of three or more. Once a set of tiles has been matched, their backgrounds become blue. Turning all the background tiles blue will release a Talisman piece or jewel. The ultimate goal is to have that treasure reach the bottom of the board by clearing the tiles directly underneath it.

There are a lot of subtleties in the core gameplay that keep Azkend feeling fresh for hours. First is the lightning system. Every time a set of tiles containing a non-blue tile is matched, part of a lightning meter fills. When the five levels of the meter are filled, lightning bolts will hit the board and help to clear remaining tiles. The lightning can also be summoned by matching seven or more tiles in a single turn.

What really sets Azkend apart however is its power up system. After every five boards the Talisman pieces that have been collected are assembled to create a usable power that can  help to clear larger amounts of tiles. Special tiles will begin to appear on the boards and matching them will unleash the power of the player’s chosen Talisman. The powers can be triggered by as little as four matching tiles but will become increasingly effective if more tiles are matched at once.

There are eight unique Talisman powers in all for players to collect over the first 40 boards of the game’s Adventure Mode, while the remaining boards are spent collecting jewels to fill the ancient Relic and allow it to be returned to its home temple. The Talismans allow powers such as bombs, hammers and extra waves of lightning to be unleashed in order to help clear boards. Later in the adventure, Talisman choice can play a huge role in the success or failure of clearing a board. I can not stress enough how much the Talisman powers add to the Azkend experience.

There are several unique tiles in Azkend to help add some variety to the game as well. Steel tiles have to be matched on twice in order to turn blue. Other tiles like those encased in ice or infected by tar must have a tile next to them cleared in order to make them usable. There are also locked tiles that will be placed to block areas of a given board. These must also have a tile cleared next to them to be cleared. Finally there are wildcard tiles that let you to string sets of matching tiles together, allowing for longer chains and more lightning being unleashed.

Aside from the excellent core mechanics and power up system, Azkend features several levels of hidden object style gameplay that also serve as plot points. The game is broken down into a series of ten weeks. At the end of each week, our traveler reaches a new temple and has a mysterious vision. Players will be presented a small section of a beautifully drawn picture to match with an area of the larger scene. Matching all the vision sections within an allotted time will provide a time bonus for the following seven puzzle boards.

While players may not even notice the timer on many of the early boards, a few extra seconds can make all the difference as the difficulty ramps up. Each board in Azkend has its own shape and tile placement. By the end of the Adventure Mode there will be multiple steel tiles, locks and even holes in the board waiting to challenge a player and the two or three minutes the game allows you to clear a board will start to feel very short indeed.

After clearing the four to five hour Adventure Mode, players can return to any board on the map and attempt to get an expert level rank by clearing it with more than 50% of the allotted time remaining. There is also a robust Survival Mode to keep you busy. In Survival Mode, players use one of the eight talisman powers to survive as long as possible on a board. Every time the board is cleared, a star is earned and the board is reset.

I had no trouble spending over six hours with Azkend and I still didn’t manage to complete everything the game has to offer, including unlocking all of the in-game achievements. For less than the price of a take-out lunch, Azkend provides an excellent, highly-polished game at a great value. This really is a retail or Xbox LIVE Arcade quality title in the palm of your hand and it deserves a spot in any iPhone/iPod Touch owner’s library.